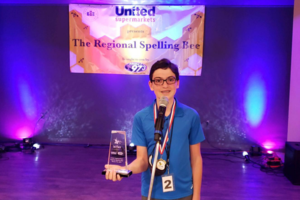 “I’m so excited to represent Frenship Middle School, Frenship ISD, and the City of Lubbock,” said Noel. “I’ll do my best to make everyone proud!”

Noel’s impressive talent has generated quite the buzz. At just three-years-old, he was already spelling words like hippopotamus and chameleon. His fascination for letters and words continued to grow over the years, setting him up for success in what can often become intense and highly competitive spelling bees.

Noel started his winning streak at the Frenship District Spelling Bee in 2017 as a fourth grader. This past February, he won this fifth consecutive district title.

In 2018, Noel won first place at the Lubbock Regional Spelling Bee, allowing him to compete in the Scripps National Spelling Bee. In 2019, after another regional win, he made his second appearance on the national stage. Unfortunately, in 2020, both the regional and national spelling bees were canceled due to the pandemic.

“He put in hundreds and hundreds of hours to get to the national bee for a third time last year, only for it to be canceled,” said Dr. Michael Noel, Matthew’s father. “He has put in twice as much effort and twice as much work for this year.”

Noel and his family feared this year’s regional bee would again be canceled due to a lack of sponsorships. “The response from the community was wonderful. At the very last minute, the wonderful people at United Supermarkets and Double T 97.3 banded together to save the Lubbock Regional Spelling Bee,” said Dr. Noel.

On March 27, Noel took the stage at the United Supermarkets Regional Spelling Bee, and after nine rounds against four other school districts, the Frenship Tiger won first place by correctly spelling the word accurate. “He was 100% prepared and ready to go 100 rounds if needed. He has learned over 100,000 words like gyttja, Tchefuncte, and ajimez,” said Dr. Noel.

Noel says he will continue studying for his upcoming trip to the Scripps National Spelling Bee this summer. As an eighth grader, this is his last eligible year to compete.

“Every competition is challenging and exciting,” said Noel. “I’m proud of the competitors, and Frenship has some great students for next year. I’m looking forward to seeing how spelling will help me in future organizations and competitions at the high school level.”