Frenship's Athletic Director Understands What It Means to SERVE 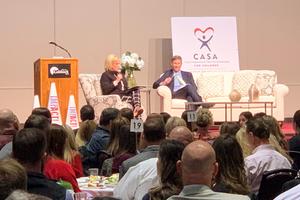 Frenship ISD Athletic Director, Kenny Catney, was a keynote speaker at the CASA of the South Plains IMPACT! Luncheon last week. Catney shared his story about his role as an advocate for children in foster care.
Xavier O. had been in foster care for five years. He had been in 14 different placements. He was part of the Residential Treatment Center (RTC) program and on a path of destruction. That is, until a special person became his advocate through Court Appointed Special Advocates (CASA) for Children and stood firmly in his corner.
Frenship ISD Athletic Director, Kenny Catney, has been a CASA volunteer for several years, serving as a voice for kids in foster care and those tied up in the court system. His affinity for working with children transcends his role at Frenship ISD into the community in this volunteer role. Catney was already working with another child as a CASA when he got the call about Xavier.
“When I heard about Xavier’s situation, there was no question of whether or not I’d be willing to help,” said Catney.
Catney’s first encounter with Xavier was spent getting to know each other, but he quickly cued in on signs of a medical condition that had gone undiagnosed. Catney’s first step as Xavier’s advocate was to get him the diagnosis he needed. The undiagnosed condition was the barrier keeping Xavier from returning to his family permanently.
With Catney’s help, Xavier was able to see medical professionals and be properly diagnosed. Beyond his diagnosis, Catney was part of a team who helped guide Xavier into counseling, therapy and ultimately the treatment he needed to turn his life around.
“Xavier never gave up on the process,” said Catney. “He is now learning skills that are going to change his life forever. I’m proud to be a part of his journey.”
“He was always there for me,” said Xavier. “I met him in the middle. He gave, so I gave too. He always encouraged me to look ahead to the good things that were coming.”
“I have experienced such happiness and joy in the relationship I have with Xavier,” said Catney. “He is growing up to be a great young man and is now reunited with his brother and grandmother. I’m proud that he has a forever family now.”
Xavier now enjoys a life as a regular teenager, no longer spending his days in foster care, or court hearings, or wondering what obstacle he’ll have to overcome next.
The CASA IMPACT! Luncheon gave others in the community the opportunity to hear about Catney’s story with CASA and service to Xavier. Their time spent on stage ended with Xavier presenting Catney a watch that he and his grandmother had picked out especially for Catney.
Coach Catney is a profound representation of the spirit of the Frenship community and one who kindly exhibits The Frenship Way. Thanks, Coach Catney, for showing us what it means to SERVE others.
Smile, Engage, Respect, Volunteer, Encourage